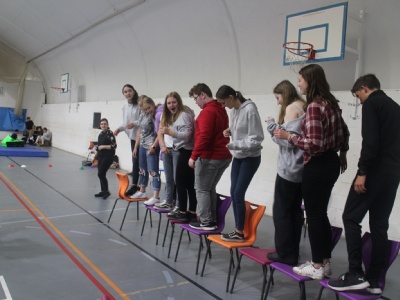 On Tuesday 6 July, our new Year 12 students were welcomed by the Sixth Form for their ‘Year 11 into Year 12 Sixth Form Induction Day’.

Students were acquainted with their teachers and spent time in their chosen subjects in the morning, before moving onto a fun-filled afternoon. The Senior Prefect Team organised a range of team-based activities including a marbles race; basketball; tug of war and Henna. An ice-cream van also made an appearance, generously donating 10% of earnings to MIND, a mental health charity working all around the country.

“Induction day was very reassuring after the confusing past two years we have had. We were introduced to our teachers, and we received everything we would need in order to be ready for Sixth Form at the end of the summer. The day ended unexpectedly with some great team-building activities that were good fun, and was very competitive!” Gina Murphy – Year 11 Student

"The sixth form induction day was great, and gave me a glimpse of what life in the Sixth Form will be like, whilst accompanied by friends, which made it that much better." Alex Preston-Jeffreys – Year 11 Student