Collingwood Footballers Do the District Double!

On Friday 11 May the Year 10 footballers arrived at Aldershot Town FC looking to win their third District Cup final in four years.  Their opposition were Robert Mays who were looking to claim their first.  The game started very slowly and straight away the size of the Aldershot pitch was very clearly going to play a factor in the game.  Halfway through the first half Robert Mays took the lead with an unfortunate own goal from Collingwood.  We responded well and started to move the ball quicker which in turn created some openings for us.  Half time soon came and we went in 1-0 down.

In the second half the boys were a lot more fired up and knew that they hadn’t performed to their ability in the first half.  Unfortunately we then conceded again with a well-taken goal from the Robert Mays centre forward.  2-0 down with 25 minutes to play I wasn’t worried as I knew the boys had it in them to step through the gears and show their true potential.  Oli Ewing came on at this point and took control of the game and showed why he is playing at his current level.  His presence on the pitch lifted the whole team and within minutes we had scored two very quick identical goals with Jonathan Marsh the scorer of both.

At 2-2 the game was now only going one way and a few minutes later Jakob Carl was put through one on one and managed to just bat the goalie to poke it through his legs to make it 3-2.  The difference in the boys’ performance at this point was magnificent and they were now showing why they have won the Premier league for four years in a row.  Oli Ewing then duly got on the score sheet with a very well-taken finish into the bottom corner with his left foot.  With 5 minutes to go Jakob Carl showed some good trickery in the box to be brought down and we were awarded a penalty which Jakob scored very confidently.  A few minutes later the final whistle went and to the delight of the huge support at the stadium the boys had won their third District Cup final in four years.

This group of students are a very talented bunch and it has been a pleasure to be their manager over the past 4 years.  I look forward to their final season in Year 11 and hope they can go on and complete a fifth league title and Cup double.  I must also thank all the parents for their continued support at not only these great occasions but also all the league games we play at the schools in the district as well. 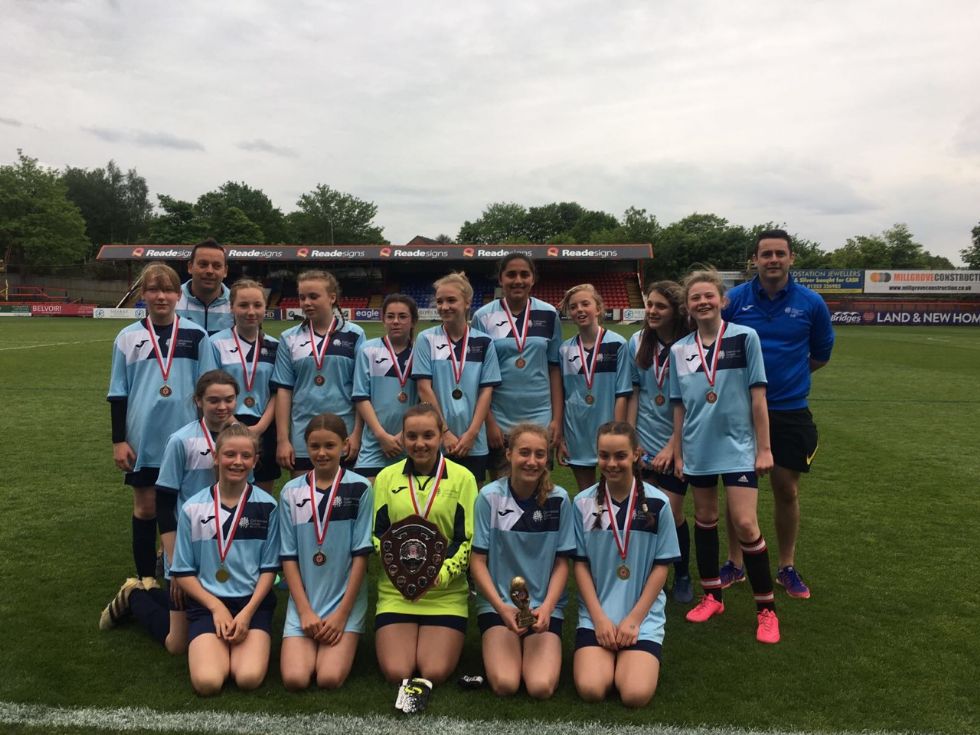 Whilst Collingwood went into the final as firm favourites, having already beaten their counterparts in the league this year, they knew from their improved results in the latter part of the season that this would be tougher.

The first fifteen minutes of the game bore this out.  Collingwood were playing some great football especially down the right where Chloe Connor was a big threat but couldn’t make the breakthrough.  Chloe, Aimee Webb and Maddie Heavingham-Ford all going close.  Only a great block preventing the latter from scoring.

It was not all one way traffic though and at the other end only some timely interceptions from Neve San Emeterio and Lara Pearson and a couple of great saves from Daisy Brown, stopped Weydon going in front.  After all the great football the team were playing it was ironic that a long ball from a Lara Pearson goal kick found Chloe Connor through on goal and she volleyed the ball emphatically past the goalie.

1-0 became 2-0 when having only been on the field for a matter of minutes the outstanding Lola Yates smashed one past the goalie from the edge of the box.  Not to be outdone the next goal was the goal of the game. From slightly further out Maddie Heavingham-Ford rifled a thunderous drive in off the crossbar.

Just before half time the game was as good as sewn up after a flowing move involving Lola Yates, Aimee Webb and Chloe Connor, top scorer Keira Lourdes slotted a calm finish into the side of the goal.

Mr Eaton and Mr Cleary rung the changes at half time but the second half started in the same fashion with some wonderful free-flowing football being played by the girls.  Maddie went close with a header from a corner as did Lauren Ellis who would have scored the fifth but for a brilliant block from the Weydon defender.

Collingwood kept up the pace and eventually got their fifth goal with a great strike from just inside the box from Keira after tenacious work from Emily Carney.

The scoring was rounded off with a much deserved goal when Neve San Emeterio put Aimee Webb through and she rounded the goalie and calmly slotted home.  Aimee also wins the award for best celebration.

When the final whistle went the jubilation (and relief) was fantastic and the team celebrations were brilliant.  Lara Pearson, outstanding throughout, deservedly lifted not only the trophy but the player of the match award too.

Thank you to all the parents, friends and family who came and supported the girls. They are a credit to you.  They have managed to win the Aldershot and District League and cup double, along with the

They are a phenomenal bunch of young ladies.  With a great attitude and brilliant willingness to listen and learn.  Many of them have bright futures in the game!